The most brilliantly pointless thing since Tetris.

The original SimCity was released in 1989 and caused a colossal stir with its simple yet intricately clever gameplay, winning a few dozen awards in the years following. The concept of designing and nurturing your own metropolis, leading it through its initial backwater stages and expanding it in size and glory along the ages, was hugely exciting. SimCity 2000 retains the elegance and simplicity of the original, but with an added dose of high-resolution goodness and refined gameplay. 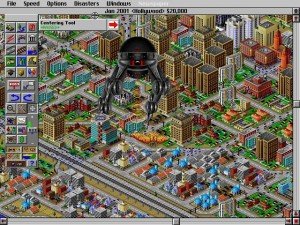 If things get dull, you can always call in a rampaging alien to test your emergency services.

You’re the mayor of a city and it’s up to you to properly designate areas to be residential, commercial or industrial zones. You need to set up power and water grids, plan the infrastructure and keep everyone happy. As your city grows, you need to balance taxes and budgets. In a nutshell, this is what gameplay ultimately comes down to – a fine balancing  act, where both the needs of your sims and your own budgetary constraints are factored. Tables, charts and query windows track everything from pollution, traffic density, tax revenues to hospital beds and crime stats, and a pop-up newspaper will fill you in on what your sims are doing.

Even when you think you’re doing fine, you always get that drive to better your metropolis. A cool head for numbers is handy but not necessary, since you have to address taxation and public spending to keep the city on an even keel. Things hot up even further as you dive into future tech, which unlocks cleaner industry, more high tech power generators and overall more advanced but expensive technology.

In addition to simulating a city, the SimCity titles have always been the most aesthetically appealing of strategy games. It’s easy to forget, but SimCity 2000 was on the forefront of high-resolution gameplay. Zoomed out at airplane altitude, it’s amazing how much your city resembles a real metropolis. From that distance, the cities look somewhat drab, but each zoom level unfurls layer after layer of colorful detail. At the second-to-last zoom level, the graphics are vibrant and alive, though not really animated. Only at maximum zoom-in do the graphics betray themselves, as (likely for memory reasons) the buildings just get pixeleted and details get lost.

SC2000 is an overall well polished and enjoyable city builder, and an unmistakable visual heavyweight in its heyday. It might not be as forgiving as later iterations as far as gameplay goes, but it’s still great nonetheless.